What should you know about white women's underwear? 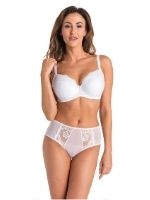 Underwear and white embroidery remind us of women with a wedding, with innocence, and white panties with a young girl. Even half a century ago, women wore only white underwear, which was not appropriate to show anyone. White underwear was very practical because it was possible to boil it and remove stains from it. Colorful fruit made its mark on the market in the mid-twentieth century and delighted women with their multi-color. Until recently, it seemed that white underwear would work well under white blouses.

Is only white lingerie for a wedding?

White wine and embroidery became and for short years was in its elegance and innocence the perfect color and bride. For ladies and gentlemen, the white color of underwear with the addition of eye-catching embroidery is associated with this special day, which is the wedding day. And white lingerie can be sensual and romantic and fits very nicely with a tanned body. White underwear is very defensive because it is still considered decent underwear and is put on under bright and white clothing, and it turns out that it is better to wear a white bra at a meeting or at work than a white bra. To make white underwear less visible, for example from under white T-shirts, it is obvious to reach for smooth underwear without lace decorations. However, many women move away from white underwear for wedding dresses or white blouses on a daily basis, they choose natural, i.e. nude, because it is invisible under white blouses, it blends with the skin tone. There are ladies who put on underwear in light powder, light blue or pink ecru under the wedding dress.

The madness of white underwear

Underwear in white color, I mean now panties that are only made of stripes, transparent mesh decorated with delicate elastic laces with various floral motifs, as well as photos of t-shirts with frills or ruffles, cutouts and necklines, then the whole number for men if it's all about color. White color will always be noticed and remembered by the male sex. In the segment of erotic lingerie, such as petticoats with thin straps, flared babydolls, which are transparent, or stockings or panties with an open crotch, white color clearly marks and is absorbed by male eyesight. A sensual, surprising white outfit for an evening for two, it is remembered.

How to wash such women's underwear?

Washing white underwear might seem like a very simple activity. The previously mentioned activity of boiling or washing at very high temperatures, in order to get dirty, can be used in the case of cotton and not all of them, it applies to the one with marked work up to 40 degrees, such cotton has an admixture of synthetic fibers. White underwear with the addition of decorative lace, frills should be washed in the period of temperatures. White tends to turn gray quite quickly, so if you decide to wash in a washing machine, you should use special washing bags and be careful to put only white items in the washing machine and wash it in adulthood. It is ideal to earn money to wash white underwear by hand, but in the modern world there is no time for it and with the technology of willingness on the part of women, because each of us assumes that the washing machine is definitely better. One more advice, if our white underwear turns gray, do not use any bleach, because such a measure will irreversibly damage the underwear, let's use our grandmother's methods, i.e. washing white underwear in baking soda or soaking in kefir.